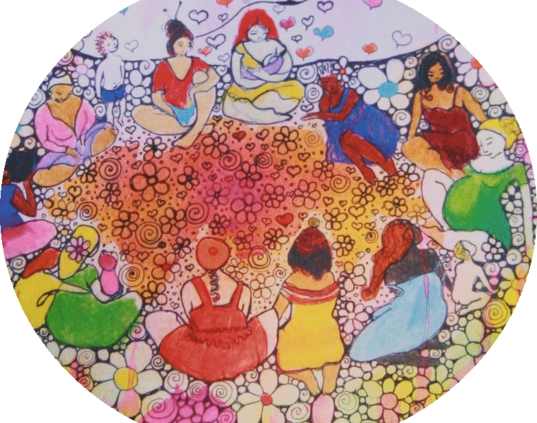 Once you go through that whole process of the growing and the getting out of a baby, you’re then expected to rear it. Oh, look, I’m what’s called a mother…!

Amidst copious other advice, you will hear, often, “It takes a village to raise a child.” Usually at this point in the diatribe I was either taking a secret micro-nap, or I would hear “blah blah blah blah”.

The Village was something that probably happened in another part of the world – the Villagio.

I did not have myself a circle of women who sat cross-legged on the dirt in the centre of our village of huts, just waiting to change my baby’s nappy. There were not 50 over-experienced great, great aunts at my disposal, nor a specified nursing mother who would feed my baby if I couldn’t be bothered, not even a witch doctor to make the little turkey sleep. No army of womanhood hovering in wait.

Of course, my babies have a wonderful family network, but they have full and fantastic lives of their own. And I never wished that bond to be stretched – my hope was that it was about loving the time spent together, not life-sucking chores.

I’m past the baby phase so I haven’t thought of this sprouting of wisdom for a longtime.

And now I think I understand:  The Villagio is not that circle of women chanting “ohm” whilst sitting on the soil in a round. It might be just one person, who is worthy of my child’s admiration.

Let’s take a recent example of a woman, let’s call her Queen of Soccer, who stood, alone (no circle), on some nice clean grass (no dirt), and hollered “kick the ball” (not “ohm”), to my children. Not a hut in sight, just some goal posts.

She was teaching them football. In this village, there was kindness, boundaries, support and telling them it how it is. Her goal posts never moved – she was consistent.  She gave my little boy who was lacking in confidence, his confidence back, by encouraging and inspiring him to pump out the hard work.  Their training with the Queen of Soccer is finished for now, but the kids continue to think about her, and pumping out the hard work remains, as do all the lessons she gave them. She holds a place in their hearts, so that village is not gone.

In actual fact, the Villagio that helps raise your children, is not exactly about the physical help, as I thought, but the emotional guidance. It is not a place where barefoot women carry your child on their stomach for the first five formative years for you; It is a place where your child’s emotions feel safe, where they are built up in grounded confidence and inspired in life. A place where they grow, in the right direction.

So, now I have this definition, who else is in my village?  Well, my fabulously busy family are of course – there is no safer – or fun – place. Nanny’s funny friend, who only likes to talk about bodily gases. A dance teacher. The family you only see once a year but who fill your cup to overflow. Your own closest friend. My little man’s Kindy teacher. (Don’t all Kindy teachers hold a special place in our hearts? Mine still does). In fact, teachers, coaches, club or church leaders should probably be on the To-Do list for the making of your Villagio. They are inspiring in your kids skills for life.

At some point, when our children disappear and re-emerge as spotty, hairy, nearly-adult’s, I suppose they begin to choose their own village – wisely, we would hope. Perhaps, if we’ve set up a good example of our Villagio, they might find the same qualities in their own.

So now if you say ‘Village’ to me (although Villagio sounds far more exotic – like it might throw the odd Carnivalé party after tea time), I won’t nap or hear “blah blah blah”.  I will think about who I have chosen to care for and inspire my kids.  It’s actually quite a big deal.

Because a village is, in fact, not about the mother at all.

The Marvellous Mammogram
Scroll to top